Toronto police unveiled new body-worn cameras on Monday that front-line officers will be required to wear across the city.

Deputy Shawna Coxon, Superintendent Michael Barsky, and members of 23 Division held a show and tell on Monday morning to demonstrate the technology and answer questions.

Toronto police started its first pilot program on body-worn cameras in 2014 and earlier this month the cameras were approved by the Toronto Police Services Board. 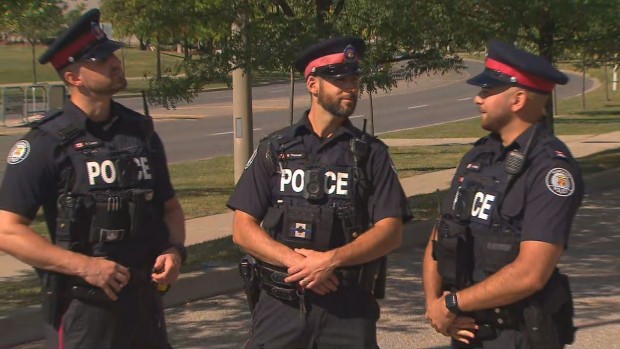 Last week, officers in north Etobicoke started wearing the cameras and Coxon said 2,350 front-line officers across the city are expected to be wearing them by fall 2021.

“There’s an extensive training component to this so it’s not quite as simple as just giving out a camera,’’ Coxon said. “We want to make sure the officers have the appropriate training, including on the privacy issues and the extensive governance we put in place to deal with them.”

A plan approved by the board will see the service buy 2,350 cameras at a cost of $34.1 million over five years.

Most of the cost for the cameras are for cloud-based storage space to keep the hundreds of hours of video that will be generated by the cameras each day.

The aim of the cameras is to increase transparency and accountability amid several recent protests calling for the defunding of the police and even abolishing the police.

“I think they’re going to be an essential piece but again they’re only one piece as we try to enhance public confidence,”Interim Police Chief James Ramer told CP24. 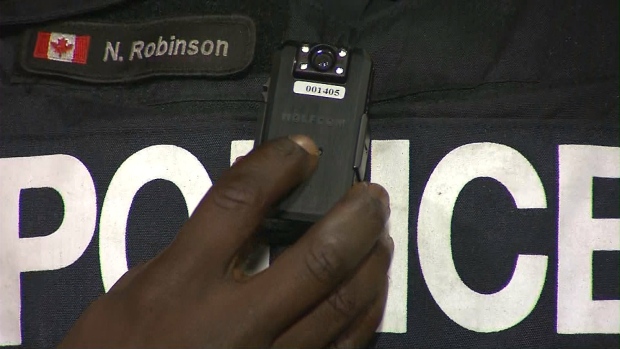 Coxon said the cameras will be turned on while officers are responding to a call but they can also be turned off for various reasons too.

“Think about when you’re dealing with a victim, sometimes we show up to calls and people are partially naked, sometimes people don’t want to be filmed and it might be a sensitive situation, sometimes children are involved,” Coxon said.

Sgt. Sean O’Brien was at the preview today and said he welcomes the use of body-worn cameras.

“I think they’re awesome and they’ve been a long time coming. We waited six and a half years to get these and now we have the state-of-the-art cameras that Axon makes,’’ O’Brien said.

Coxon also noted that videos collected from the cameras won’t be easily accessible to the public. She said it will depend on the nature of every situation.

The Toronto Police Services Board purchased their body-worn cameras from Axon Canada which affirmed that all footage collected will be heavily protected.

“The original is always preserved, never modified. Adam Hassan with Axon Canada said. “It is controlled by the agency and the agency can delegate access as they see fit.’’

Mayor John Tory spoke to CP24 this morning and said body-worn cameras are a positive step in policing and “the right thing to do.”

“This is something that is going to improve police accountability… and we’ve had lots of evidence presented to us at the police board as well to the effect that it’s going to be very efficient,” Tory said.

He also said the investment in body-worn cameras will pay off in the long run.

“So for the expenditure of the $30 million over the five years you’re also going to get a substantial reduction in the amount of time that police officers have to take notes and transcribe notes and do things like that because you will have a video recording.”