Tuesday, May 26th 2020, 8:45 am – Astronomers spotted signs of brand new exoplanet forming around another star.

Astronomers have made another stride forward in their quest to image the birth of a planet around another star directly.

For decades, scientists have been developing the basic ideas about how planets form around stars. First, a star forms from a collapsing cloud of gas and dust. The remaining material surrounding the star is spun into a disk by the star’s rotation, and parts of that disk clump together due to gravity. As these clumps gather more material to them, first planetesimals form, then protoplanets, and finally planets.

This all makes sense in theory – that is, the physics and mathematics generally work out – but these ideas still need to be verified by actual observations. Also, this model is likely missing many small, but important details that result in lingering issues for researchers. Seeing and imaging protoplanets in the midst of forming would solve these problems, and lead to a more robust model that could then explain pretty much any strange planetary combination we find out in the galaxy.

Over the years, astronomers have gathered roughly two hundred thousand protoplanetary disk candidates, just waiting to be imaged. Due to the limits of technology, however, they had to wait until 2018 for telescopes to improve to the point where they could start capturing the first images of protoplanetary disks. 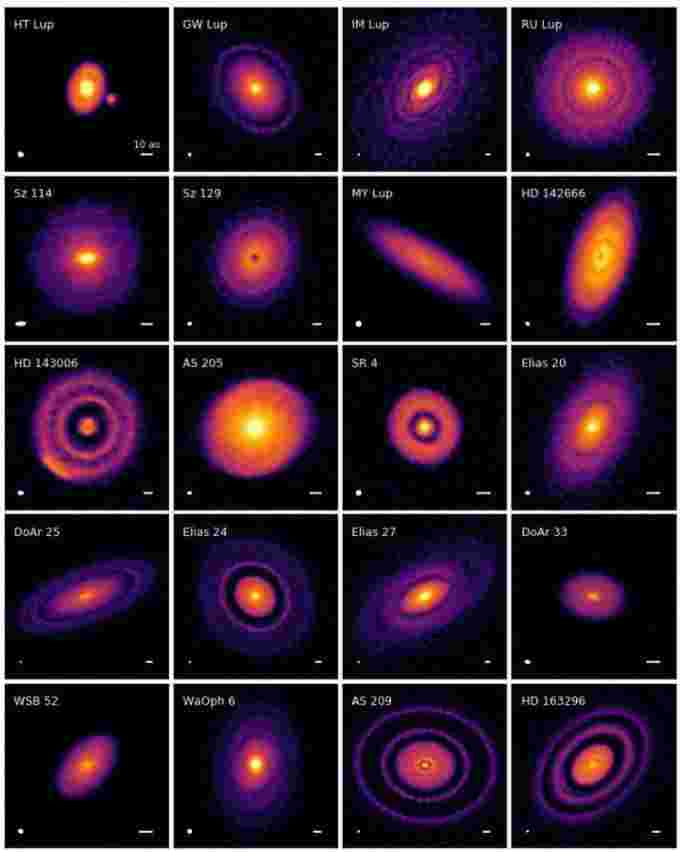 Until now, though, they still had not been able to focus in close enough to these disks to actually see an infant planet in the process of forming. Over the past year, Anthony Boccaletti, from the Paris Observatory at France’s PSL University, led an international team in an attempt to do just that.

“Thousands of exoplanets have been identified so far, but little is known about how they form,” Boccaletti said in a European Southern Observatory (ESO) news release. “We need to observe very young systems to really capture the moment when planets form.”

Using the ESO’s Very Large Telescope (VLT), high up in the mountains of Northern Chile, Boccaletti and his team zoomed in on AB Aurigae, a young star in the constellation Auriga, located around 520 light-years away from Earth. 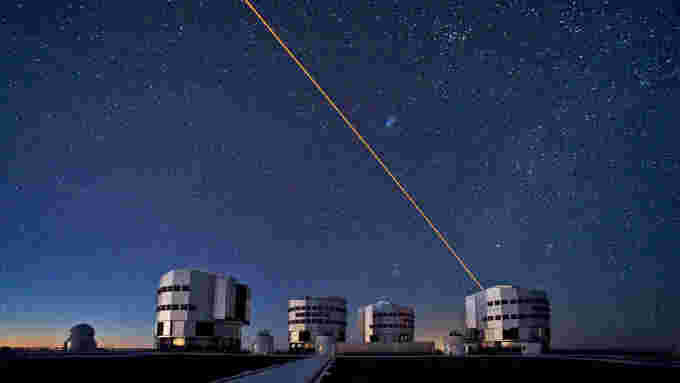 The ESO’s Very Large Telescope (VLT) beams a ‘guiding star’ laser up into the night sky, allowing its adaptive optics to take the clearest images of distant objects in space. Credit: ESO

Peering into the core of the AB Aurigae system, VLT captured the best images of the star’s planet-forming disk taken yet. Although they did not directly see a planet there, these images did capture the next-best thing. 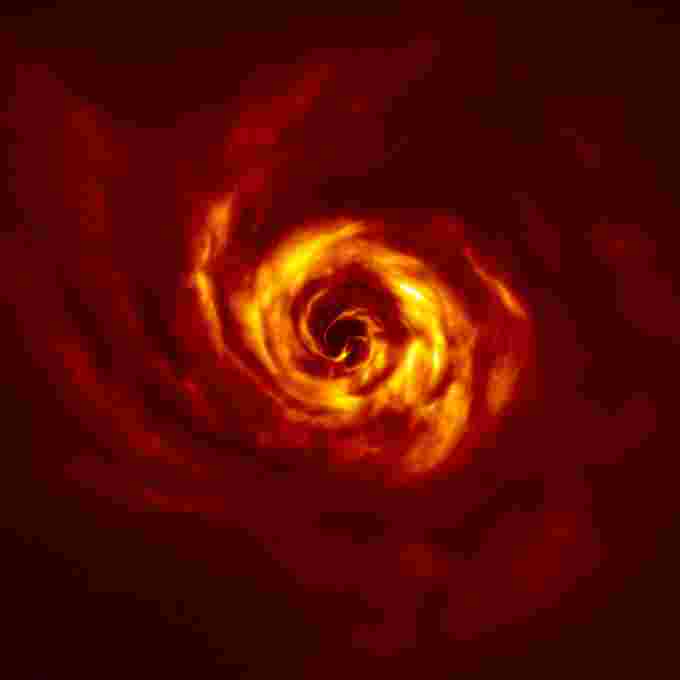 What we see here is an image captured by VLT’s Spectro-Polarimetric High-contrast Exoplanet REsearch instrument, also known as SPHERE. To produce this view of the system, SPHERE relies on a particular property of light to become ‘polarized’ as it reflects off a surface. SPHERE can apply various filters to collect the polarized light reflecting off dust grains and other objects surrounding a star. By doing so, it filters out all the unpolarized light being emitted directly by the star.

Thus, while a view like this would typically be completely washed out by the light from the star, SPHERE gives astronomers a detailed look without that bright interference. 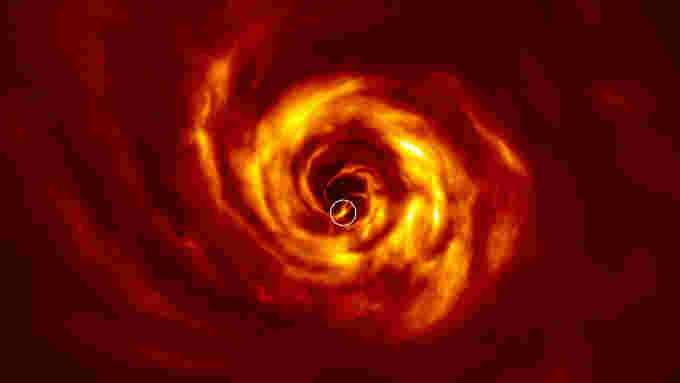 This VLT image for AB Aurigae reveals a bright ‘twist’ in the material around the star. Credit: ESO/Boccaletti et al./Scott Sutherland

By using SPHERE to observe AB Aurigae, Boccaletti and his team were able to resolve all the spirals of dense material (bright), and the darker gaps between those spirals.

In a particularly important find, though, they also spotted a bright ‘twist’ in the disk of material spiralling around the star, at roughly the same distance that Neptune orbits around the Sun. They identified this twist as the likely location of a planet in the process of forming.

As study co-author Emmanuel Di Folco of the Astrophysics Laboratory of Bordeaux (LAB) explained in an ESO press release, similar to a wave in the wake of a boat, this twist is a telltale sign that something big is moving through the gas and dust of this star’s protoplanetary disk. 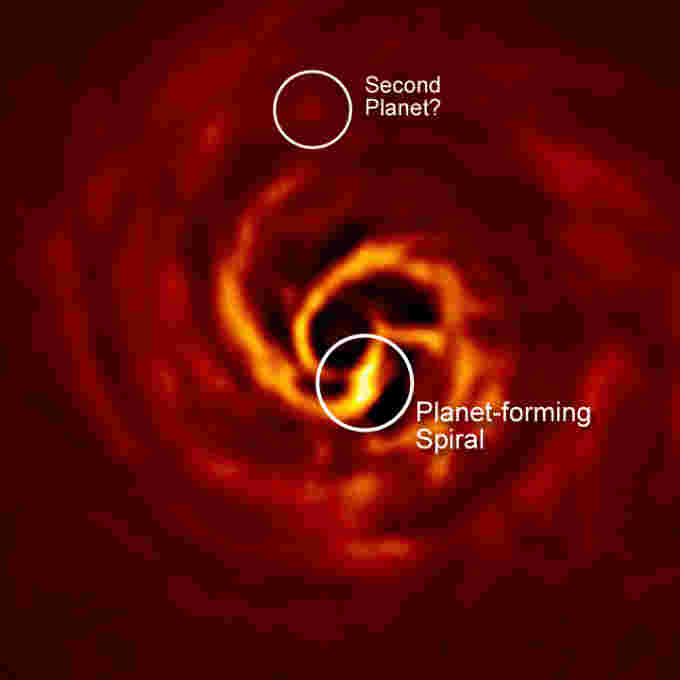 A larger view of the ‘twist’ reveals the spiral arms in more detail. The researchers also note a potential second planet in the view. Credit: ESO/Boccaletti et al./Scott Sutherland

“The twist is expected from some theoretical models of planet formation,” co-author Anne Dutrey, also with the Astrophysics Laboratory of Bordeaux, said in the press release. “It corresponds to the connection of two spirals – one winding inwards of the planet’s orbit, the other expanding outwards – which join at the planet location. They allow gas and dust from the disc to accrete onto the forming planet and make it grow.”

In the study, published in the journal Astronomy & Astrophysics, the researchers note that a second planet may be indicated in this view of AB Aurigae. It shows up as more of a ‘point source’, however, rather than another twist. They give a rough estimate that if this were another planet forming, it would likely be around three times the mass of Jupiter. The baby planet inside the ‘twist’ could be significantly larger, they say, with estimates of anywhere from 4-13 times Jupiter’s mass!

Astronomers will likely have to wait until the ESO completes their Extremely Large Telescope (ELT) in 2025 to revisit AB Augirae for a more detailed look. This current discovery is still significant, however. Not only is it verifying some of what astronomers already knew about planetary formation, but it will undoubtedly teach them something new. It could even help them to find even more of these baby planets in the making.