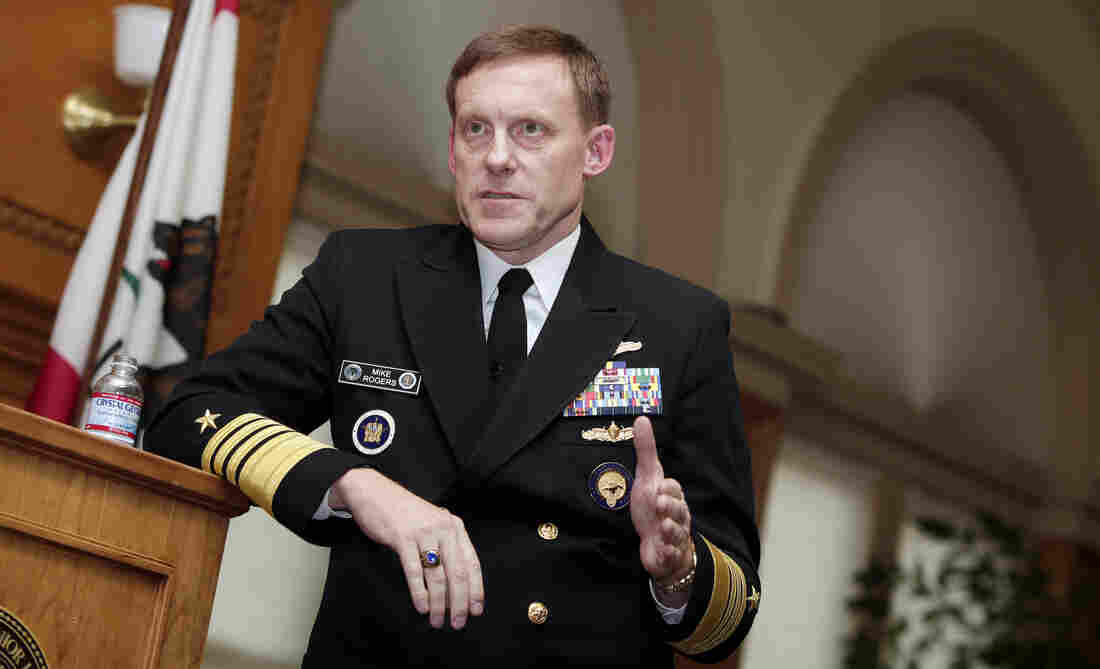 The former director of the National Security Agency, Adm. Mike Rogers, tells NPR that in the run-up to the 2016 election he wishes “we had taken more direct, more public action (against Russia) sooner as opposed to doing so after the election.” He’s shown here in 2014. 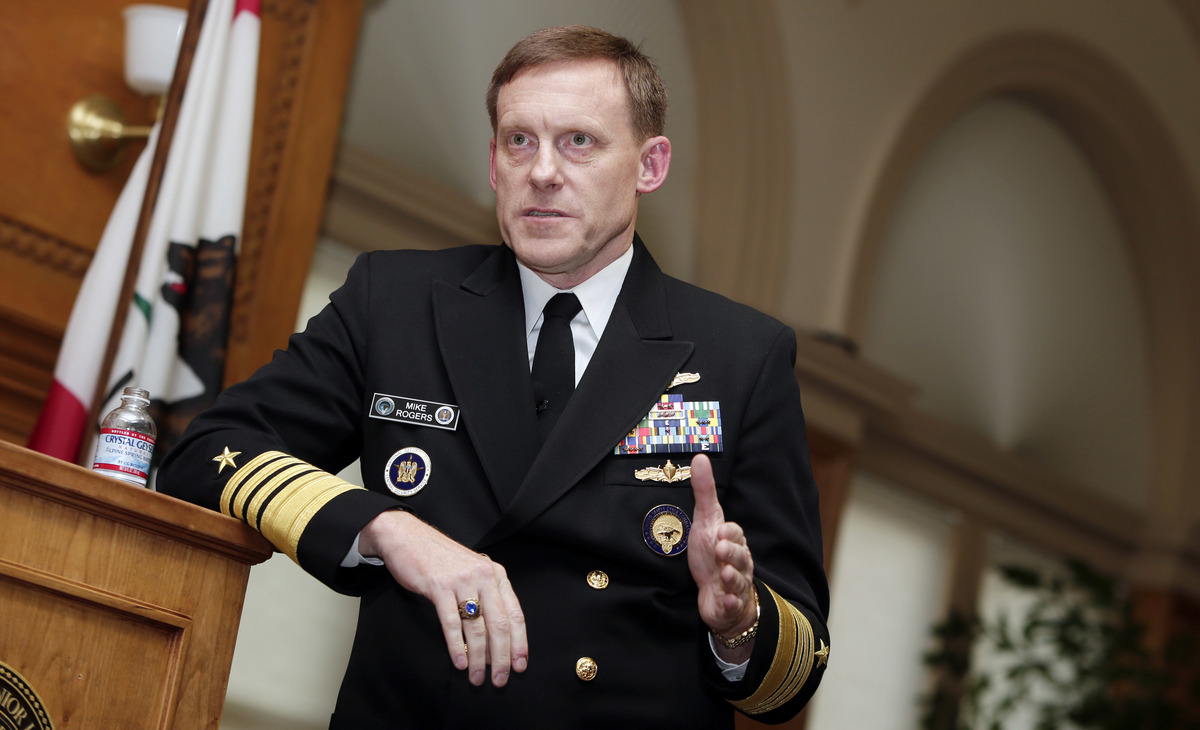 The former director of the National Security Agency, Adm. Mike Rogers, tells NPR that in the run-up to the 2016 election he wishes “we had taken more direct, more public action (against Russia) sooner as opposed to doing so after the election.” He’s shown here in 2014.

In August 2016, during the run-up to the last presidential election, U.S. intelligence officials began briefing congressional leaders on what they described as unprecedented Russian interference efforts.

The Russians had a history of meddling, but this time was different, Mike Rogers, then the director of the National Security Agency, told All Things Considered co-host Mary Louise Kelly.

“What was different was, number one, the scale of the effort. Number two, the breadth of the effort. It wasn’t just cyber [attacks] and penetrating networks. It was this aggressive disinformation campaign,” Rogers said. Russia President “Vladimir Putin himself directed this activity and we watched the subordinate elements in the Russian government then executing this strategy that he had approved.”

Most other senior intelligence intelligence officials at the time, such as CIA director John Brennan and FBI director James Comey, have spoken out extensively since leaving government. But Rogers has largely avoided topics like Russian election interference. He now says the intelligence community underestimated the full extent of the Russian actions.

“While we had some level of knowledge in the summer of 2016, I don’t think we fully appreciated the level of effort, particularly on the social media side,” Rogers said. “Part of that is inherently the challenge of an intelligence organization, particularly one like the National Security Agency, which is a foreign intelligence organization. You don’t want us involved in attempting to monitor U.S. social media and people’s right under the First Amendment to express their opinions.”

The Russians, he added, “have taken advantage of that.”

Asked if U.S. intelligence agencies and the government should have done more before the 2016 election, Rogers said: “I wish we had taken more direct, more public action sooner as opposed to doing so after the election itself.”

Rogers continued as head of the NSA and Cyber Command under President Trump before stepping down in May 2018. Before he left, he pressed for the U.S. to be more aggressive in going after cyber threats.

Rogers’ successor, Army Gen. Paul Nakasone, says he received that authorization and used it to send cyber teams to Europe to protect the U.S. midterm elections in 2018 against Russian interference. Nakasone wrote an article published Tuesday on preparations for the election this November.

“The United States disrupted a concerted effort to undermine the midterm elections. Together with its partners, Cyber Command is doing all of this and more for the 2020 elections,” Nakasone writes in Foreign Affairs.

Here are excerpts of Rogers’ interview.

Do you think Putin, then or now, paid much of a price for interfering?

“My sense is, as he looks back, it was a good effort. It was a good investment, and it was probably more effective than the Russians had anticipated in some ways.

Can you draw a direct line from where we are today, back to 2016, and say, Russia set out with a goal and and here we are. They achieved it.

“I would say the goal continues. I haven’t seen any lessening of [the Russian] commitment to achieving that goal of weakening our institutions. You’re seeing a consistency over time. And in fact, it predates the 2016 election. I think the lesson to be drawn is we have yet to be able to change [Russian] calculations to make them decide that engaging in these kinds of behaviors are not in their best interest.”

How much do you worry about the security of this election?

“There’s increased awareness. That’s a real positive. You can see increased focus and commitment within the government to both defending our electoral process and systems from cyber, as well as working with social media companies to see what can we do to attempt to ensure accuracy of identity. The challenge remains from an authoritarian state [like Russia or China] that doesn’t care about the rights of individuals, that doesn’t care about truth, it doesn’t care about commitments to the First Amendment, the freedom of speech. Are you going to see those authoritarian states attempt to use our very freedoms, if you will, against us?”

“I do fundamentally agree that that there should be no doubt in anybody’s mind that that is totally unacceptable. And the first step in dealing with it is ensuring there’s general awareness of the types of activity. I think you’re broadly seeing that now. I think the bigger challenge in some ways is, ‘OK, it’s great to have awareness now. What are we going to do about it?’ That in some ways is the hardest part of all.”

U.S. intelligence is also warning about security threats from China and Iran. Is that the same thing as the threat from Russia?

Trying to influence the election is not the same as trying to interfere with it or sabotage the election. I don’t know the specifics right now of the activity that’s being referenced. If you go back to 2016, what you saw was the Russians wanted to definitely influence shape to a specific outcome. What you saw from China and a handful of other nations was less a focus on attempting to manipulate or shape the outcome and much more a focus on, ‘OK, we need to understand what are the positions of the parties of the individuals with respect to my nation.’ It was less about manipulation and much more about them trying to understand a particular party, a particular individual viewpoint about their nation, whether that nation be China or Iran or others.”

“That would be up to a president. My input, if I was asked, would be, I believe in the idea of accountability. And if you’re going to engage in illegal activities like steal classified information, you should be held accountable. Number two, we have a legal framework designed to ensure that both parties, the government and in this case a particular individual, have the right to express their views and try to make a justification for what they did. I would like to see that opportunity afforded to both the government and to Mr. Snowden. Hey, make your case. If you felt what you did was right, make the case and let’s have a jury of your peers make a decision.”

Other former intelligence chiefs like CIA Director John Brennan, Director of National Intelligence James Clapper and FBI Director James Comey have all since spoken out in defense of U.S. intelligence. Do you feel a duty to speak out?

“So we’re talking today. Both as former government officials as well as citizens, individuals have to decide what’s right for them. For me, I just have always felt as intelligence professionals, retired military leaders, we need to be very mindful of the potential second- and third-order effects of getting into politics. I’m just mindful of that for me. I’m not trying to question the actions of others. They have to do what they feel is right. I can only speak for myself. And so I take a little different approach.”