Overall, the deflationary trend continues. The BLS said the Consumer Price Index for All Urban Consumers (CPI-U) declined 0.1% in May on a seasonally adjusted basis. Over the last 12 months, “headline inflation” increased 0.1%. Just four months ago, U.S. inflation was running at 2.3%.

Core inflation, which strips out food and energy, came in at -0.1% for the month and 1.2% for the last 12 months. Both numbers were lower than the consensus, and the May report marks the first time core CPI has ever declined in three consecutive months, the BLS said.

One factor in the May deflationary trend was the continued decline in the price of gasoline, which fell 3.5% in the month and is down 33.8% over the last 12 months. That trend could be reversing (at least a bit) in June, as gasoline prices seem to have stabilized. Consider this: the decline in gasoline prices was 20.6% in April.

Other deflationary sectors reflect the effects of COVID-19 lockdowns:

In our locked-down world, however, a drop in the price of gasoline or airline fares or even apparel isn’t saving consumers a lot of money. On the other hand, prices of very necessary items have been increasing:

So, this May inflation report is sending mixed signals: Many prices declined because of the effects of virus lockdowns, but costs of staple items (like food and medical care) increased at a brisk pace.

Here is the trend in U.S. inflation over the last 12 months, showing the dramatic decline linked to the outbreak of the COVID-19 pandemic in February:

What this means for TIPS and I Bonds

Investors in Treasury Inflation-Protected Securities and U.S. Series I Savings Bonds are also interested in non-seasonally adjusted inflation, which is used to adjust principal balances on TIPS and set future interest rates for I Bonds. For May, the BLS set the inflation index at 256.394, nearly identical to the April number of 256.389.

The May inflation report means that principal balances for all TIPS will remain essentially flat in July, following a decrease of 0.67% in June and 0.22% in May. Here are the new July Inflation Indexes for all TIPS.

The May report is the second in six-month string that will determine the I Bond’s new variable rate, which will be reset on November 1 based on inflation from March to September. Two months into that rate-setting period, inflation is down 0.67%, which would result in a variable rate of -1.34%. This is significant, because even though an I Bond can never decline in value, a negative variable rate will be subtracted from the I Bond’s fixed rate, resulting in a six-month period of 0.0% composite interest. I think that is looking likely for many I Bonds, beginning in November.

Here are the relevant numbers:

What this means for Social Security COLA

The Social Security Administration sets its annual cost-of-living adjustment based on a complex formula using CPI-W, the Consumer Price Index for Urban Wage Earners and Clerical Workers. The SSA looks only at the average of three months – July, August, and September – versus the average for those three months a year earlier.

As of May, CPI-W was set at 249.521, down slightly from 249.871 in May 2019. In order for the Social Security COLA to increase in 2021, CPI-W will have to average more than 250.20 for the months of July to September. That could happen, but the increase in the COLA is likely to be zero or very small. I will be writing more about this in upcoming months. 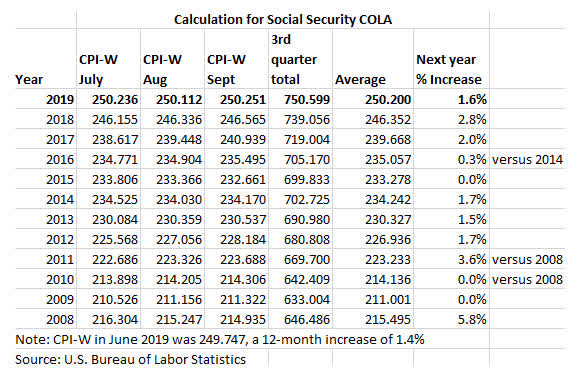 What this means for future interest rates

Inflation came in lower than expected in the May report, so there’s nothing here that will alter the Federal Reserve’s plan to hold short-term interest rates in the current range of 0.00% to 0.25%. That translates to a 4-week Treasury bill paying about 0.12%. I’d expect these very low interest rates to continue well into 2021, until employment rebounds and/or inflation spikes higher.

The Federal Reserve could announce some actions this afternoon, but with the job market showing signs of life, and the stock market already back to its pre-COVID levels, I’d expect the Fed to hold off on any major moves.

If you are worried about deflation over the next year, a smart investment move would to invest some of your “safe” allocation in federally insured bank CDs. For example, Ally Bank currently is offering a no-penalty 11-month CD paying 1.2% interest. Money can be withdrawn after 6 days, with no penalty. That’s a lot more attractive than a broker’s money-market account paying 0.01%.

Disclosure: I/we have no positions in any stocks mentioned, and no plans to initiate any positions within the next 72 hours. I wrote this article myself, and it expresses my own opinions. I am not receiving compensation for it (other than from Seeking Alpha). I have no business relationship with any company whose stock is mentioned in this article.

Additional disclosure: David Enna is a financial journalist, not a financial adviser. He is not selling or profiting from any investment discussed. The investments he recommends can purchased through the Treasury or other providers without fees, commissions or carrying charges.