PORTLAND, Maine (AP) — Maine House Speaker Sara Gideon beat two other Democrats on Tuesday for the right to challenge Republican U.S. Sen. Susan Collins in a race that’s critical to the battle for control of the Senate.

Gideon is poised to further increase her haul: Her victory entitles her to $3.7 million from a crowdsourced fund for Collins’ challenger that was established during the Senate fight over Brett Kavanaugh’s Supreme Court confirmation. Democrats were furious over Collins’ vote in favor of Kavanaugh.

Speaking live online, Gideon attacked some of Collins’ votes and said she’s prepared to face the nation’s “unprecedented challenges” during a pandemic that threatens health, safety and the economy.

“If we’re going to come together and make real progress to improve the lives of people here in Maine and across the country, then we need new leadership. Because after 24 years in Washington, Sen. Collins has become part of that broken system, putting special interests and her political party first. And Mainers know it and feel it,” she said.

Collins has raised $16 million. The four-term senator is a household name in the state with a reputation for independence but Democrats are hoping to topple her over her critical 2018 support for Kavanaugh, President Donald Trump’s controversial appointee. 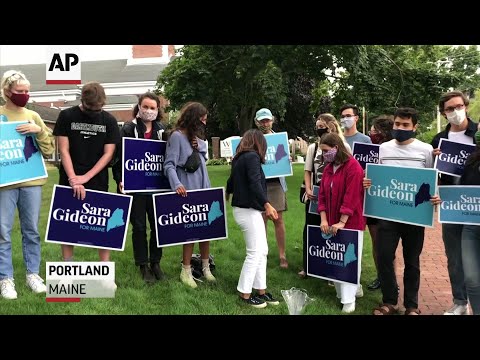 Kidman and Sweet criticized the Washington influence and said Gideon’s vow to take money out of politics rang hollow as her own money grew into the biggest haul of any political candidate in Maine history.

The coronavirus pandemic didn’t slow fundraising for a pivotal race for Democrats seeking to take control of the Senate. Gideon raised $9 million in the last quarter, extending her fundraising advantage over Collins.

Democrats need to gain at least three seats to capture Senate control. Republicans are defending 25 of the 38 seats in play, even as Trump’s deteriorating standing in the polls jeopardizes GOP candidates around the country. With Collins widely considered one of the GOP’s most endangered Senate incumbents, her reelection would narrow Democrats’ pathway to wresting control of the chamber.

Because of the pandemic, state officials encouraged voters to use mail-in absentee ballots for the primary election instead of voting in person to avoid crowds at polling places that could serve to spread the coronavirus.

Polling stations were open nonetheless on Tuesday with strict sanitation rules, but they were quiet and voters were scarce.

Secretary of State Matthew Dunlap said voting had gone smoothly with nearly 200,000 absentee ballots. “Working with the clerks, we think we’ve done a pretty good job mapping this out,” he said.